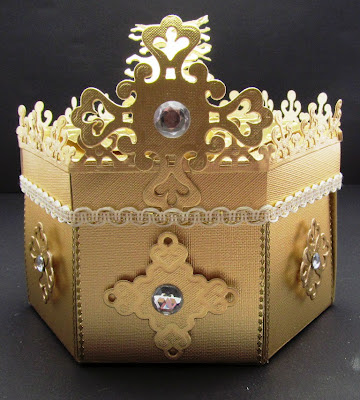 I had an unusual project to make this weekend - my friend S asked for a gift box in the shape of a crown.

This was for one of her friends who always jokingly says "if I were King for a day I would......(whatever it was)".

To begin with I was stumped as to what to do - the box needed shape, but also needed to hold the small gift.

Eventually, I came up with a hexagonal box, and I used my nestabilities to make the decorative elements (Ironwork Accents and Parisian Motifs). 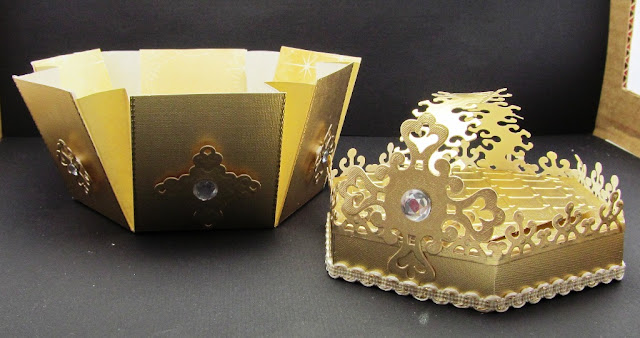 I began with some textured gold cardstock, and cut out the hexagonal shape for the lid and the base.  I then added the sides, edged with a narrow peeloff to add definition and  joined together with a paper pocket hinge. 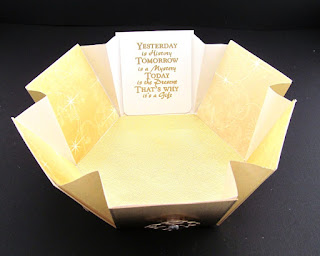 This enables the box to be opened out fully when the lid is removed.

I used the smaller dies in the set to make the embellishments to go in the centre of the sides and used gems from my stash.

The inside of the box was lined with some decorative paper and a clarity stamp sentiment.

I then began to embellish the "crown" lid. 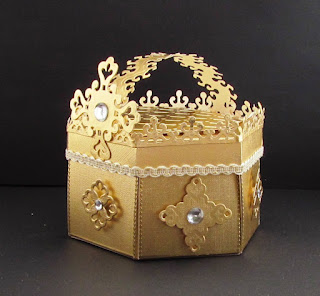 First I used some thin decorative braid to put around the base of the  lid.

On the top of the lid, I used a smaller hexagon, run through the bug with a lattice embossing folder.  This was stuck in place with a foam pad.

The final touch was the cross embellishment on the centre front of the box lid.

I made another box for the gift box to be given in - but this one was just plain card!!

I am entering my gift box into the following challenge: