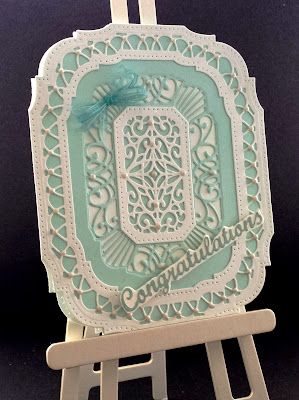 Kim is hosting our challenge this time and wants to see your shaped cards. Plain squares or rectangles DO NOT COUNT, but any other shape is fine.
Very fortuitously, I recently went to a make and take class with John Lockwood, demonstrating some of the Sue Wilson Noble dies, and we made a shaped card!
I was expecting die cutting, but this card was beautiful - and not as difficult as it looks!  The trickiest part was probably lining up the various dies so they are level.  I'm not convinced I managed it - one side looks a little uneven to my eye, but it's beautiful still despite that.
We used a plain A4 base card, folded in half and then the biggest die was taped so that the cutting edge was just above the top of the fold.  I was really worried I'd get this wrong, but amazingly, it worked.
Then we cut the various layers out including another of the largest dies out in a contrast colour (this lovely duck egg blue).  I decided to put one of the die cuts  (white) behind the blue filigree die cut, as I didn't want the sentiment to be seen, but it could have been left so you could see through it all.
We used some creative expressions cosmic shimmer pearl drops to put "pearls" all around the outer filligree edge, and in the filigree centre.
Finally, I die cut the sentiment in the duck egg blue, and mounted it onto card and fussy cut around it, and stuck it in the bottom left hand corner.  In the top left corner I stuck a narrow ribbon multi bow which I had coloured with a promarker to match.
I couldn't afford to buy the dies after the class this time (I had far too many other goodies in my basket already) but they are on my Wishlist for Ally Pally in September - Creative Expressions give a discount if you spent over a certain amount.  All I need to do now is work out exactly which ones we used... 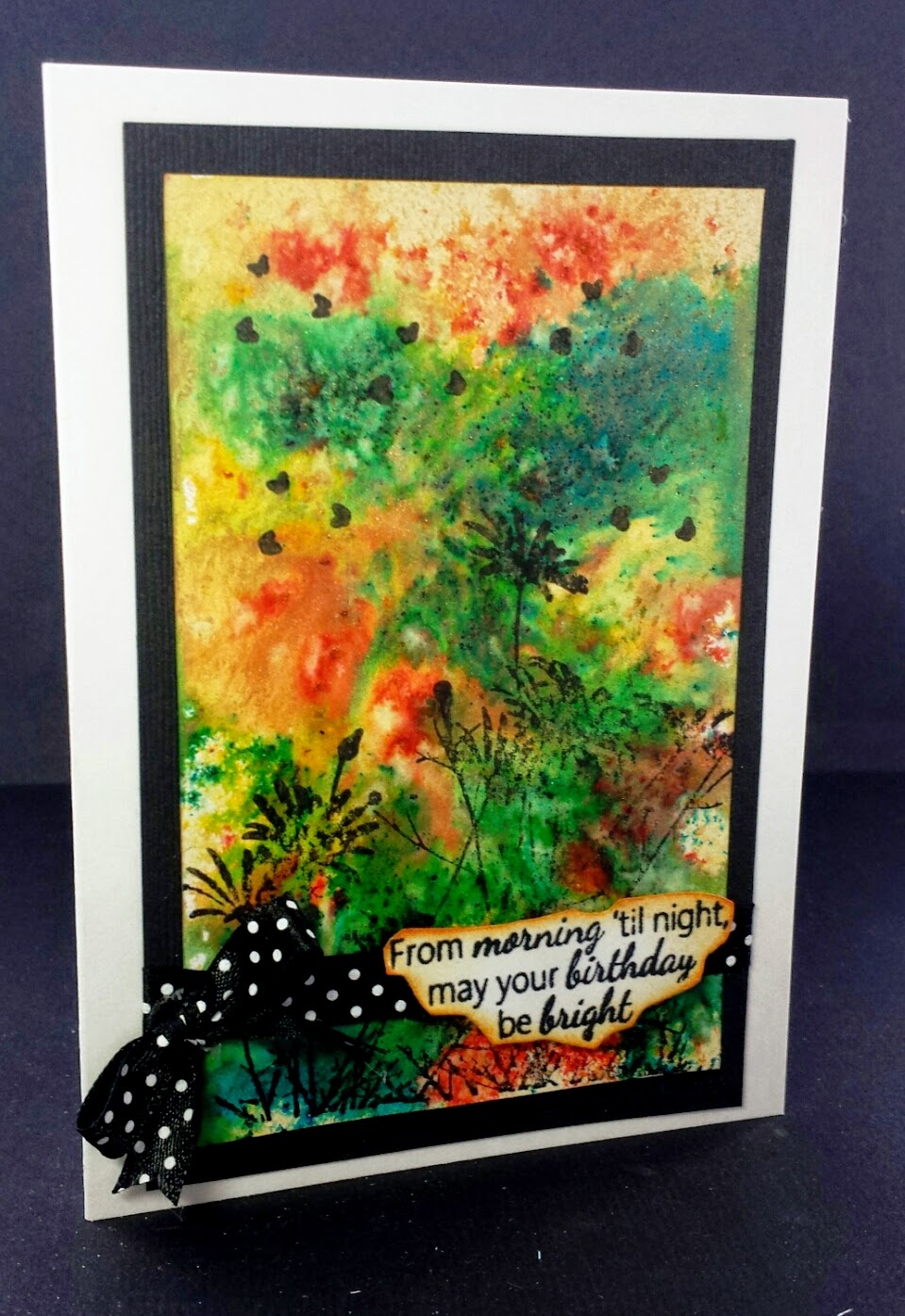 She would like to see something that you have created using a background you made yourself. So NO designer papers please.


I like making backgrounds - sometimes I get more pleasure out of doing that than making the topper, to be honest.

I'm not a neat crafter - I like the messy play aspect of it sometimes, and I have been looking at the brusho backgrounds for some time now.

Recently, I discovered a craft shop that specialised in all the arty inks and paints I love (check out That's Crafty, in Harold Wood) and treated myself (among other things) to a starter pack of the brusho paints.

They look like any other powdered paint and come in small drums.  However, if you shake a tiny piece of the powder onto a piece of water colour card that has had a plain water wash put over it, each speck EXPLODES into colour spectacularly!

This was a smallish card (A6) and I made it for a friend who recently lost her mum.  She was dreading this birthday, the first without her mum, so I didn't want to go over the top with her card.

I used half a sheet of A4 white card folded in half to make my base card.  I cut a piece of water colour card from Crafters Companion to make my background layer.   First I did my plain water wash, and then using a small brush picked up some of the colour powder from each drum (turquoise, yellow, lemon,  orange and emerald green) and flicked it randomly on the wet card.  Where bits had dried a bit, I spritzed it and reactivated the powder.  When the wash had dried, I stamped onto it an inkylicious flower silhouette stamp inked up with black archival ink.  When it was dry  I spritzed the whole thing with some docrafts spritzing ink (gold).

When the card was dry again, I layered it onto a piece of black card  to make a thin edge that would make the colours pop.  I wrapped some black spotty ribbon around the bottom of the mat and layer, and then stuck the whole thing onto the base card.

The last thing I did was to stick a bow made using the same ribbon and a stamped sentiment edged with distress inks onto my ribbon strip using my hot glue gun.
Posted by J at 12:36 5 comments: