Over the past few years I have acquired a LOT of dies.  Not as many as some people, but a lot by my standards.  When I first started collecting them, I had a metal board and I stuck all my dies on there using magnetic strips.   This worked ok - but the numbers grew and soon I had lot that didn't fit on my board.

So I experimented.  First I just kept them in tupperware boxes by type, but if you can't see them you don't use them.  Then a friend suggested using the metal cd box that I used to keep my promarkers in.  But I didn't see them, either.  And I got tired of going through the box.

So then I splashed the cash and got one of those folders from Crafters Companion with the magnetic sheets.  And that works really well - but the folder is SUPER heavy.  I've put most of my matting dies in there though, and will get another couple of magnetic sheets for the remaining dies.  But I have a lot more dies that are one offs, or small sets, like flowers.  And I didn't really have the cash to go for another lot of sheets even if they would a) fit in the binder and b) I could lift it!

Then my friend S happened to say that it was a shame there wasn't a system that let you move the sheets of dies around, like the poster displays in shops and I went off on a scouting mission.

First I bought a 10m roll of self adhesive magnetic tape, which I thought would be lighter than a whole sheet.  Dies don't need a lot to stick to as long as key points are covered.  This cost me £9.65 from a company on ebay.

Most of the wall mounted multi poster displays on sale in the UK were about £50 including postage - and that was a lot more than I wanted to pay for an experiment.  So I checked these out on ebay too, and on there found a company in Lithuania selling a plastic version for $35 (including postage) or around £21.  In a spirit of adventure I ordered it - and it arrived within the week.

So yes, it is plastic.  You get what you pay for.  But!  It also works really well.  There are 8 A4 poster holders (which you can use on both sides) and a sturdy plastic sheet is also supplied to go inside them.  I just put some grey board in there to give it some stability, and then stuck my magnetic tape at judicious intervals on the sheets. 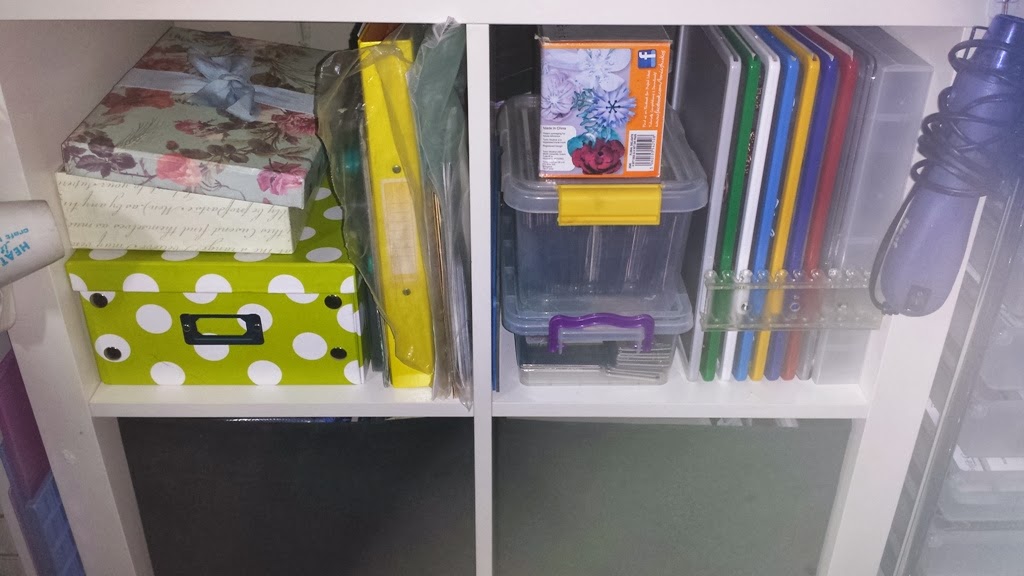 Sadly, the plastic fixing that goes on the wall is not strong enough to bear the weight of the dies - like I said, you get what you pay for - even though to be fair, it would be fine with paper posters in it.  However, it stands up on my work top just fine - and sits neatly in my ikea expedit unit along with the two tupperware boxes I decided to keep for my small spellbinder die lites, memory box dies, and the cuttlebug thick dies, right next to the CC storage folder.