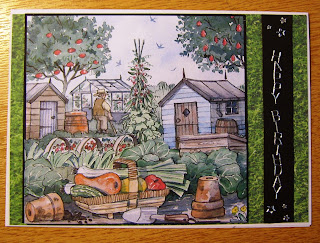 I had a bit of an "eek" moment today.  I suddenly realised I missed a birthday yesterday, so I had to make a card super quick.    Worse, it was for a man so was doubly difficult!

The topper was made from the new Big One cd, which has just been released from La Pashe.  The image used was a trinitage - 3 layers of decoupage, but nothing fiddly.  I wanted this card to go in the post, so just used foam pads to separate the layers (you are supposed to put them on a multi fold stepper type thing I think to really make them stand out)

As  a result you can't really see from the photo that the lower bits at the front (up to the cloches and the cabbages) are raised, which really make them stand out in real life!

The base card was a white 5 x 7 blank and I used a sheet of "grass" backing paper as a mat on top of it.

The final touch was the sentiment, which was a silver peel off mounted onto plain black card.  It is going to be late - but it's the thought that counts!
Posted by J at 00:32