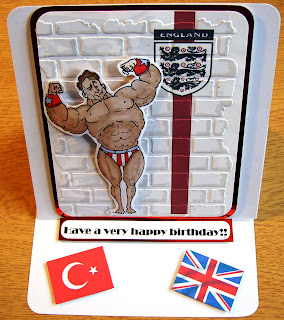 Today's card is a birthday card for a very vain 26 year old - the brother of one of my colleagues at work.

Techniques used are a combination of printing images snagged from online, a digistamp from Mo Manning that was coloured in using promarker skin tones, and embossing using the Creative Expressions brickwall embossing folder in my 'bug.

The base card was white, and I printed onto cardstock the England badge background.  This was then trimmed and put into the embossing folder. The brick edges were then highlighted using Cool Grey 1 promarker.

The brick embossed sheet was trimmed and the edges rounded off and then mounted on red mirri card.

More red mirri card was used to mount the happy birthday sentiment.
My strong man was shaped and then attached to the front of the "wall" using pinflair glue.  Finishing touches were the two flags that represented the family heritage.
Posted by J at 19:30